The Preparatory Document of the XV Ordinary General Assembly of the Synod of Bishops on the theme “Young people, the faith and vocational discernment” is guiding the process of preparation of the Pre-Synodal Meeting of March and the Synod of October.

As it is known, the Holy Father wished to accompany this synodal journey  with his personal letter to the youth of the whole world : “A better world can be built also as a result of your efforts, your desire to change and your generosity. Do not be afraid to listen to the Spirit who proposes bold choices; do not delay when your conscience asks you to take risks in following the Master. The Church also wishes to listen to your voice, your sensitivities and your faith; even your doubts and your criticism. Make your voice heard, let it resonate in communities and let it be heard by your shepherds of souls” (the letter of Pope Francis to the young people). 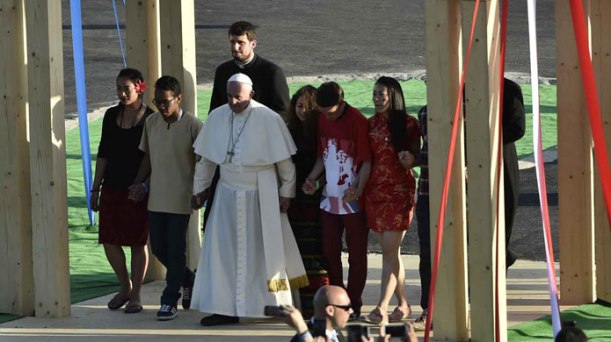 By now the questionnaire of consultation, sent to the representative bodies by law (Synods of Bishops and Councils of the Hierarchs of the Eastern Catholic Churches, Episcopal Conferences, Dicasteries of the Roman Curia and Union of Superior Generals) proved to be a very useful tool. There is also the great novelty of a consultation of all young people through an Internet site, with a questionnaire about their expectations and their lives. The answers to the two questionnaires formed the basis for the drafting of the “Instrumentum Laboris”(working instrument) which will be the point of reference for the discussion of the Synod. Once again Pope Francis amazes us and encourages us to be protagonists of the Gospel and authentic and courageous witnesses of Christian life. All the young people of the world are “summoned”; they are called to make their voices heard, too often suffocated by the world of adults.

I would also remind you of the words that Jesus once said to the disciples who asked him: “Teacher […] where are you staying?” He replied, “Come and see” (Jn 1:38-39; the letter of Pope Francis to the young people).

As the Vatican has announced already, Pope Francis will canonize Blessed Pope Paul VI during the Synod of Bishops; a great gift for the youth of the world.

Let us begin this synodal journey knowing that the Lord calls us to follow Him with trust and passion, certainly He will always be with us during the journey.